Laparoscopic Hysterectomy (Uterus Removal) is a procedure in which the patient’s womb (uterus) is removed surgically. The uterus is an important part of the female reproductive system where the fertilized egg develops and grows into a fetus (baby). Therefore after hysterectomy, pregnancy is not possible. Depending on the condition affecting the patient, the doctor may remove the patient’s ovaries and fallopian tube as well. 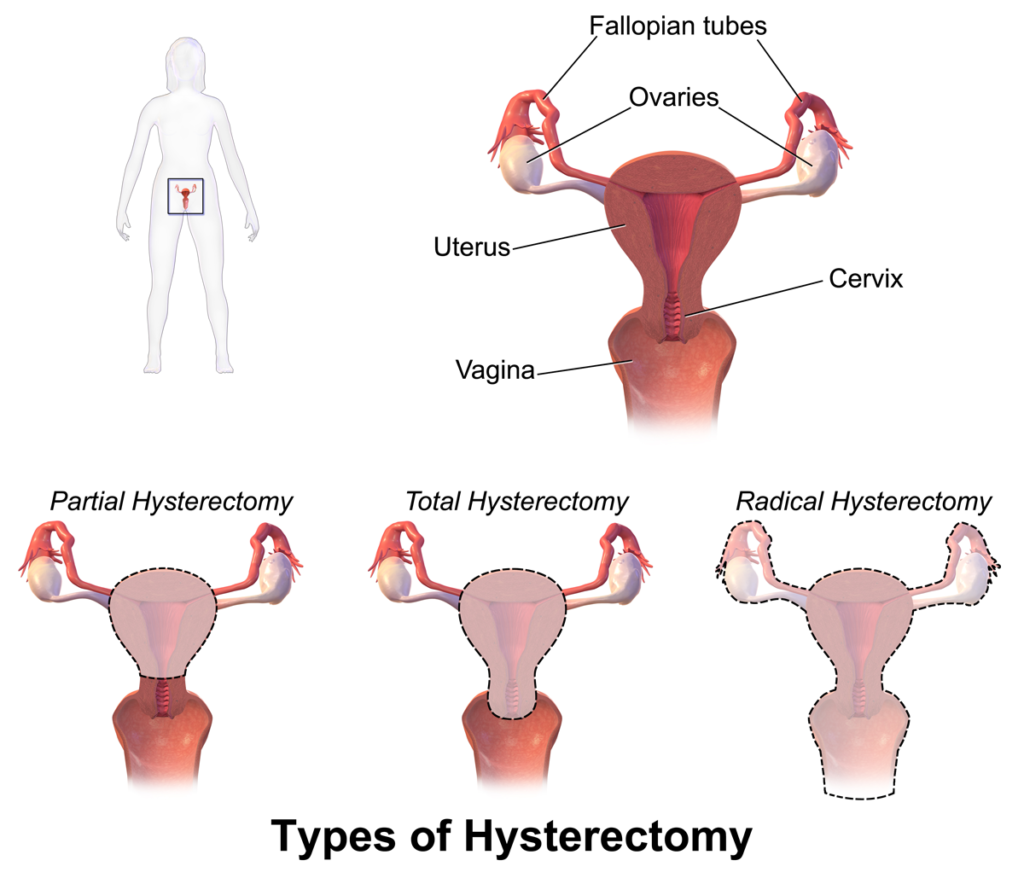 Depending on the condition to be treated and its extent, the doctor may perform one of the following types of hysterectomy.

The doctor may leave the cervix intact and remove only a part of the uterus.

This type of hysterectomy is performed to remove the entire uterus.

In this case, the doctor will remove the whole uterus and one or both of the ovaries and fallopian tubes.

Radical hysterectomy is a procedure in which the uterus, fallopian tubes, ovaries and tissues around the uterus are removed.

Hysterectomy is usually performed to treat the following conditions:

Adenomyosis: Adenomyosis is a common disorder in which the tissue that normally lines the womb grows inside the muscular walls of the womb. The resultant extra tissue leads to a painful menstrual cycle and pelvic pain. This disease is also known as uterine endometriosis.

Fibroids: Uterine fibroids, also known as uterine leiomyomas or fibroids, are benign smooth muscle tumors of the uterus. Most women have no symptoms while others may have painful or heavy periods. If large enough, they may push on the bladder causing a frequent need to urinate.

Endometriosis: In this disease the tissue (called as Endometrium) which normally lines the inside of the womb or uterus and which is normally shed off with blood during periods, grows outside the uterus and is seen involving ovaries, intestines, urinary bladder, the lining of your pelvis and may even spread to distant sites like lungs etc.

Uterine Prolapse: Uterine prolapse is when the uterus descends towards or through the opening of the vagina. Symptoms may include vaginal fullness, pain with sex, trouble urinating, urinary incontinence, and constipation. Often it gets worse over time. Low back pain and vaginal bleeding may also occur. Other conditions:

Normally, patients are allowed to leave the hospital in 3-5 days depending on the surgical procedure. The patient is encouraged to walk during this period. The patient may be able perform routine activities after 3-4 weeks. However the patient must restrain from pulling, pushing or lifting heavy items, she should also avoid intercourse until she has fully recovered.

Side effects of hysterectomy include menopause. The patient should also be psychologically supported since she may feel she has lost her womanhood. In some extremely rare cases hysterectomy may result in scaring of the bladder. Such instances can be avoided if the surgery is performed by an experienced surgeon.

Laparoscopic hysterectomy is performed with the help of an instrument known as the laparoscope. It is a small & lighted instrument which is inserted through small incisions made near the abdomen area. After finding the uterus the doctor will remove it in small pieces  Anesthesia is used during this surgery.